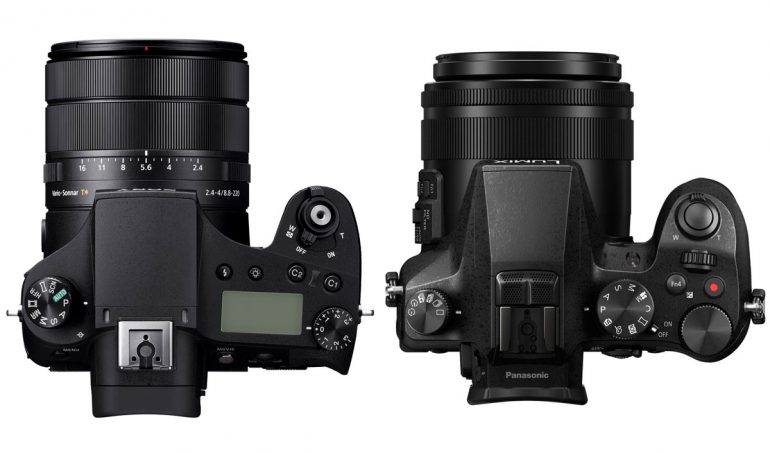 “So what should I get? I want the best do everything camera for vacations, family fun, and to pursue my photography and now video hobby/ work, but I can’t decide on the Sony RX10 IV or Panonasonic FZ2500? “

I have gotten this questions a few times over the past few months, so I figured I would write an article comparing the key differences between the Sony RX10 IV, and Panasonic FZ2500 bridge style cameras.

To start things off I just need to emphasize that both of these cameras are awesome, and will get you excellent results at the end of the day with both photos and video. So, if you have one and are thinking you made a mistake etc…, don’t worry about it. In the real world, both these cameras will get the job done, and do it well!

Now, getting into the nitty gritty! So which camera will actually be the very best option for you really depends on a few things. Budget I believe plays the largest roll, but also some key features.

The Sony RX10 IV in my opinion is more of a top of line model camera when it comes to the latest and greatest features and performance. Most notable in my opinion are the way better autofocus abilities in both photo and video, significantly more optical reach, amazing slow motion video abilities, and more pro oriented features like the focus mode dial on the front of the camera, the LCD screen on the top of the camera, and a better weather sealed camera body for example.

That being said, the Panasonic FZ2500 also offers some awesome features the Sony RX10 IV does not have like a fully articulating LCD screen and built in ND filter in particular.

So clearly the cost of the Sony RX10 IV is drastically higher and depending on your needs it is hard to justify the extra $700 cash, but you do get something for that cash, let’s make no mistake. However, for just taking photos and videos with the family for fun and what not, the FZ2500 is really going to do a fantastic job all around. The Sony really excels in the autofocus and tracking moving subjects department, so if you want to take sports photos in particular, the Sony RX10 IV would be better and offer an extra 120mm reach to boot. The AF tracking advantage the Sony has also carries over to video tracking of moving subjects as well.

Both these cameras offer high quality 1″ sensors, but the Sony sensor is significantly more advanced than the Panasonic! It stacks the pixel area, which allows for a high-speed signal processing circuit, and memory in order to increase data throughput by over five times. This allows for some more advanced features like 40x super slow motion, an Anti-Distortion shutter, and focal-plane phase-detection AF points for faster, more precise focusing. At the of the day the image quality is fantastic on both these cameras in the real world, although after looking at the comparison tool on DPReview, I think the Sony has a slight edge with the color reproduction.

So the Sony RX10 IV has a faster aperture and longer reach which works out to 25x zoom as opposed to 20x, and f/2.4-4 vs f/2.8-4.5. So for low light photography and background separation the Sony has a slight edge in the optical department. Due to the larger lens the RX10 IV has a larger filter thread which is 72mm vs the 67mm thread on the FZ2500.

The Panasonic FZ2500 offers a higher resolution 4k mode which is nice, but the Sony also offers great 4k video and has way more frame rates in full HD mode including super slow-motion @ a max of 1000fps. The FZ2500 has a huge advantage with no record limit however where the Sony RX10 IV cuts off at the 29min mark for a maximum clip length.

From the front you can see how much larger the lens is on the Sony RX10 IV and you can also see the focus mode switch it has on the lower right from this view.

The extra zoom range on the RX10 IV also calls for the lens to protrude out a lot more than the FZ2500 as you can see below.

From the top you can see the Sony RX10 IV offers the illuminated LCD Panel, which is a nice feature when you need to see key settings and don’t want to use the LCD screen on the back of the camera or electronic viewfinder. Both cameras have excellent build quality and a DSLR like ergonomic design that you really can’t go wrong with. Again, both of these cameras are awesome options at the end of the day, but the Sony does have an edge when it comes to the weather sealing.

Overall the camera bodies are very similar, but the Panasonic FZ2500 offers a fully articulating LCD screen that opens towards the side vs the partially articulating screen on the RX10 IV which goes up and down. The huge advantage the FZ2500 has is you can use the camera in selfie mode, but the Sony LCD is a higher resolution and both are touchscreens.

Another advantage to the full articulating screen on the FZ2500 is the fact that you can put it in an armor mode for when you are just using the electronic viewfinder for example.

Both cameras offer optical stabilization, but the FZ2500 offers 5-axis sensor stabilization in video mode as well, which is a bonus and a clear advantage to the FZ2500.

Both cameras offer some killer features as far as getting a good photo, being creative, and taking great video, but the FZ2500 offers way more scene modes if that is something you love to use. Otherwise the cameras have all the basic features you would need, but the Sony does offer more pro oriented features as it pertains to video options and camera customization in particular.

My Sony RX10 IV Review is Here >> if you want to see the excellent image quality and detailed real world performance the camera is capable of, but here is my youtube review which covers everything as well.

I unfortunately did not get a chance to review the Panasonic FZ2500, but TheCameraStoreTV did a fantastic job reviewing the camera back when Chris and Jordan still ran the show. Those guys are over at DPReview now encase you are wondering…

I think I might check out the new Leica V-Lux 5 which looks to be basically the same as the now older Panasonic FZ2500, with the updated Leica twist of course.

I have not reviewed the Panasonic FZ2500 personally, but I have reviewed enough cameras to know a good one when I see it. The FZ2500 is an awesome option at then end of the day, and although I am obviously a Sony fan, this does not mean I don’t recognize awesomeness elsewhere. Therefore, if you don’t need the latest and greatest technology, and you want to get an awesome bridge style camera with great build quality, design, and real world results, I highly recommend the Panasonic FZ2500.

If I were on a strict budget, I would get the FZ2500 instead of the RX10 IV, because the built in ND filter and fully articulating screen really mean a lot to me in the real world for the kind of photography and video work I like to do.

However, if I were tracking high speed subjects all day in various weather conditions, then I would opt for the RX10 IV instead for the better weather sealing, better autofocus performance, and extra optical reach advantages. Also, if I needed the incredible slow-motion abilities I would also opt for the RX10 IV, which honestly is an amazing feature!

Sony is going to make you pay for those more advanced features and at the same time deny you the fully articulating screen and built in ND filter the panasonic offers which really is a shame. I hope the RX10 V has those features built in, because if it did, the camera would really be worth the extra cash 100%. However, because it’s missing those two things, it really makes me leave the door open to the FZ2500. It’s way less money and has those key features I particularly want.

$1,700 vs $1,000 is a big difference in price, and for what I need the Sony RX10 IV is not that much better to justify the extra $700. It may very well be for you though, so don’t let me hold you back, I’m just giving you my 2 cents as somebody who is way more budget oriented these days.

Well, that is about it for this article and I really hope I gave you some food for thought if you are wondering which camera would be better for you and your particular needs. Please let me know what you guys think in the comment area below, and have a great day!

All the best, Jay